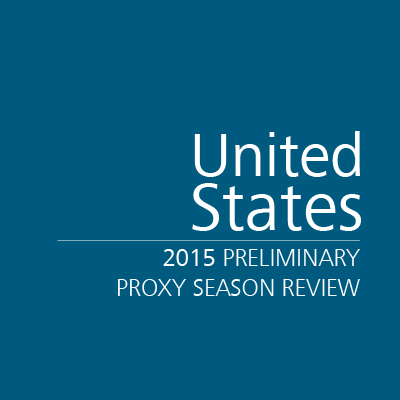 Momentum is the buzzword that best describes the 2015 Proxy Season in the U.S. market. Some issues,
such as proxy access, hit the ground running and emerged as ballot box juggernauts. Other topics, such as
calls for independent board chairs and heightened scrutiny of human rights, stumbled and lost ground.
Some new ideas, such as hybrid climate change risk initiatives aimed at impacting board deliberations on
compensation and CAPEX, failed to catch fire. Despite the rising proxy access tide, E&S proposals swamped
their governance and compensation cousins in the pre-season family reunion headcount. However, big
submission numbers failed to translate into growing support. Just one environmental proposal managed to
win majority support in the year’s first six months.