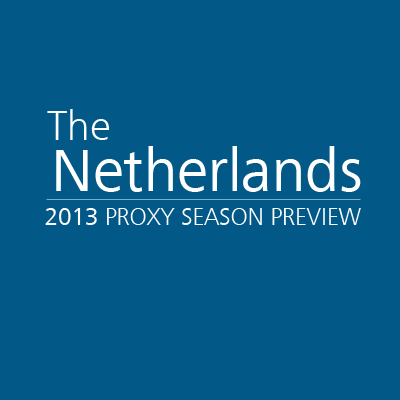 While voting season in other European markets usually is spread out over the months of April and May, in the Netherlands most companies convene their annual general meetings in the last week of April.

The Dutch parliament has increased the threshold from 1 percent to 3 percent of the issued share capital for filing items on the agenda, and has tightened requirements for transparency on substantial holdings, including gross short positions. It is expected that the law will become effective just after proxy season, on July 1, 2013.

The Dutch Corporate Governance Monitoring Commission has raised concerns about the quality of explanations and compliance with remuneration guidelines.