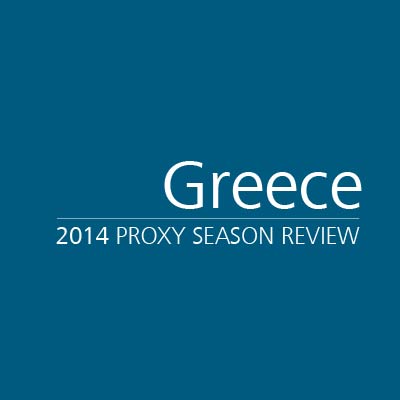 In comparing the 2014 governance practices at boards of Greek large cap companies against those of 2013, ISS analysis has observed some general movements in a shareholder friendly direction. Average board independence has increased slightly, from 27 percent to 30 percent. The majority of the large caps have a remuneration committee, although only about half have a nomination committee.

Banks participating in the Greek government’s support scheme have not distributed dividends since 2009, but two of them (Alpha Bank and Piraeus Bank) recently repurchased the preference shares held by the Greek State and gained back some flexibility for future dividend distributions.

The quality of information available for annual general meeting resolutions has improved steadily, but, in general, remains below the standards of other European markets, especially in the area of disclosure of compensation information.