The New Year’s Eve ball has dropped and so have global markets, but it’s worth taking a few minutes to recall some of 2015’s major governance trends with the help of ISS’ QuickScore data. Some of the following findings may cause you to question the “common wisdom” that swirls around governance trends on topics such as proxy access, unequal voting rights, and supermajority vote requirements. 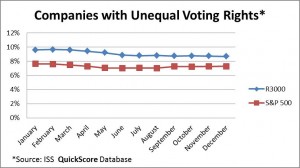 This light speed uptake of proxy access is virtually unprecedented in the annals of governance lore. The pace of proxy access adoptions was spurred by the success of 2015’s proxy access shareholder campaign (via 94 shareholder proposals on ballot – more than 60 percent of which received majority support – and 120 proposal filings on the topic in the aggregate).

Almost as many firms (120) that had received proxy access shareholder proposals in 2015 actually ended up adopting proxy access (118) in 2015. An overwhelming majority of the adopters are S&P 500 firms (82 percent). For context, only 11 firms adopted proxy access provisions between 2012 and 2014, following a Federal court’s invalidation of the SEC’s proxy access rule (Rule 14a-11) in 2011, and between 2003 and 2014, an aggregate of just 16 firms had adopted a proxy access right. In other words, a remarkable 88 percent of all proxy access adoptions to date took place during 2015. 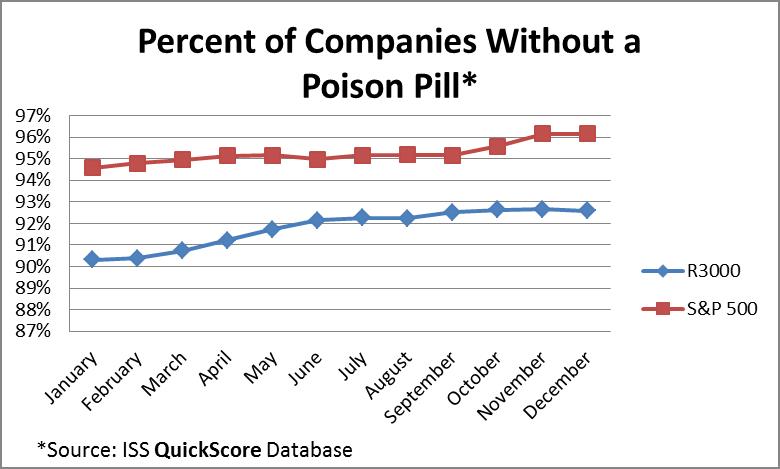 Reality: The prevalence of unequal voting rights fell in 2015 both in the large-cap (S&P 500) index and the broader Russell 3000 market. While a handful of high-profile tech IPOs featuring dual class voting structures attracted headlines during the year, unequal voting rights structures are not in ascendency. The prevalence of companies with different voting share classes dropped slightly in the S&P 500, and more significantly in the R3000, by nearly a full percentage point. These provisions can be difficult to remove, often requiring the approval of a controlling class of shares, making this trend significant, and the numbers provide a strong counter argument to perceptions of a growing acceptance of unequal voting rights.

Common Wisdom: Poison pill adoptions are on the rise in response to the white-hot M&A market.

Reality: Boards have not rushed out to adopt rights plans in response to the massing M&A action. In fact, nearly all listed companies are doing away with poison pills entirely. As of Dec. 31 of last year, only 19 companies in the S&P 500, and 175 in the rest of the R3000, maintained any sort of poison pill, shareholder approved or not. Over the course of 2015, there was a 1.6 percentage point drop in the number of companies with a pill in place in the S&P 500, and a 2.6 percentage point drop in companies with a pill in the R3000. These numbers are more substantial considering how few companies maintained pills at the beginning of 2015.

Reality: As of the end of 2015, nearly one-half (47 percent) of companies in the S&P 500, and just over three quarters (76 percent) of companies in the R3000, had supermajority vote provisions that make it harder to amend their charter or bylaws. In the S&P 500, this number declined over the course of the year, by a little over a percentage point, thanks in part to shareholder proposals on the topic. In the broader R3000, the number of companies with supermajority vote provisions actually increased by 25 companies, just over a percent of the index, excluding the S&P 500 companies.

Significant supermajority voter requirements for charter and bylaw amendments can be particularly onerous to shareholders and boards alike, as it is often difficult for proposals to garner enough support to effect change, even when management is in favor of the proposal.

These and other governance issues will take center stage as we enter into the 2016 proxy season. ISS’ Research Team will continue to provide updated and detailed analysis of these issues, and ISS’ Data Solutions are available to analyze governance and compensation trends and vote results by market and by issue. Keep an eye out for the annual ISS Board Study, proxy and voting season previews of many global markets, and all of ISS’ webcasts previewing shareholder proposals and governance trends for the 2016 season. –Pat McGurn, ISS Special Counsel and Head of Strategic Research Analysis and Studies, and Rob Yates, U.S. Research