The 2016 proxy season is shaping up to be a modest one in terms of the number of environmental and social (E&S) resolutions being filed. However, certain issues gained increased shareholder attention this year, including climate change and income inequality. So far this year, Voting Analytics shows 395 resolutions have been filed, compared to 448 submitted this time last year (479 at year end). 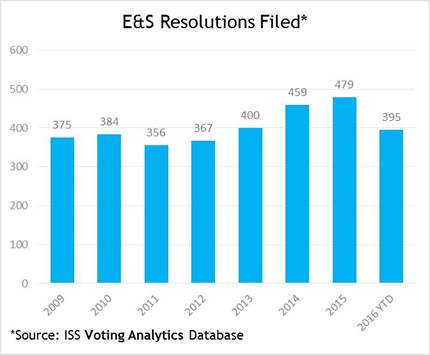 A record-breaking 89 climate change resolutions have been filed in 2016, as shareholders raise concerns about the imminent risk that government efforts to address climate change can have oninvestments, especially in the wake of the recent climate meeting in Paris. The resolutions filed vary, and include proposals on stranded carbon asset risks, greenhouse gas (GHG) emissions goals, renewable energy, energy efficiency, linking executive compensation to climate-related performance measures, and proxy voting practices. In addition to these 89 proposals, shareholders submitted resolutions on other topics, but with a focus on climate change, such as sustainability reporting, climate change-related lobbying efforts, and resolutions that indirectly relate to climate change, like palm oil, deforestation, and recycling.

Income inequality is a topic that appears primed to grab investors’ attention. Arjuna Capital ramped up its gender pay gap campaign, after filing only one resolution on the topic last year. To date, ten firms, all in the technology and finance sectors, have received resolutions seeking disclosure on the gender pay gap. Socially responsible investment (SRI) firms also submitted resolutions on minimum wage, asking six consumer retail companies to adopt principles for minimum wage reform. Furthermore, the Holy Land Principles campaign expanded this year, with the filing of eight resolutions asking companies to adopt the Holy Land Principles, versus four in 2015.

Several factors are driving the overall decline in filings in 2016. Some proponents had a “light” year in terms of shareholder advocacy, including the two primary animal welfare advocacy groups (which filed 15 proposals in 2015 and 3 in 2016) and labor groups (which sponsored 39 resolutions in 2015 versus 19 in 2016), as well as some of the SRI firms, such as Walden Asset Management with 22 lead filings in 2015 versus 15 in 2016, and Calvert Investments with 31 in 2015 and only 13 lead filings in 2016. Further, some proponents have submitted resolutions on proxy access at companies with what they consider poor environmental and social practices, rather than submitting typical E&S resolutions. For example, New York City Pension Fund’s proxy access campaign is targeting “coal-intensive utilities, board diversity laggards and companies with excessive CEO pay.”

In addition, political issue proposal filings, while still the most prevalent shareholder topic, are starting to dwindle. This year, 104 resolutions were submitted, 19 fewer than last year. This is likely the result of companies responding to shareholder requests and increasing their disclosure on political and lobbying activities. However, this phenomenon is most evident in the sustainability reporting campaign. Shareholders filed half the number of resolutions asking for a sustainability report this year (15 submissions in 2016 versus 30 in 2015), and this trend is expected to continue, as more issuers, particularly those in the S&P 500, publish sustainability reports and/or disclose comparable information on their websites.

ISS’ Environmental & Social Proxy Season Preview covers the resolutions that have been filed for the 2016 proxy season, including notable withdrawals and omissions. For a complete list of each resolution filed for 2016, including the company, status of the resolution (pending, withdrawn, omitted), and the support received in 2015 for repeat proposals, refer to the full report. An up-to-date list can also be accessed from ISS’ Voting Analytics database.

In the wake of the recent agreement in Paris, where 196 nations committed to keep global temperature rise to well below 2 degree Celsius, shareholders filed a record number of climate change proposals. Climate change is expected to take center stage this upcoming proxy season, with the submission of 89 resolutions so far, a jump from the 68 submitted in each of 2015 and 2014. Like last year, many of the proposals focus on stranded carbon assets, but proposals on renewable energy goals and utility adaptation to increased production of solar and wind energy are expected to appeared on a number of ballots as well.

Investors Domini Social Investments, Trillium Asset Management, and Zevin Asset Management filed a new resolution at six companies this year addressing the issue of minimum wage and income inequality. Filed at Best Buy, Chipotle, CVS Health, Panera Bread, Staples, and TJX Companies, the resolution asks that the companies adopt and publish principles of minimum wage reform, recognizing that a sustainable economy needs a minimum standard of living necessary for the health and well-being of workers and their families, and that the minimum wage should be indexed to maintain its ability to support a minimum standard of living. However, investors should not expect to see these resolutions on ballots this year. The SEC put a halt to the campaign, finding that the proposal attempts to ask shareholders to vote on a matter relating to general employee compensation, which the SEC has consistently not supported in the past.

Trillium also filed a similar resolution at Men’s Wearhouse, particularly focusing on the issue of income inequality, and asked that the company prepare a report describing what additional steps the company can take to address economic inequality and a timeline for implementing those measures.

Arjuna Capital continued its campaign urging companies to address the issue of pay disparities between male and female employees, filing a resolution at eight companies – Apple, Adobe Systems, Alphabet, Amazon, Expedia, eBay, Facebook, and Intel. This is an increase from the lone resolution filed last year, at eBay. Arjuna targeted the tech industry once again, which has come under scrutiny in recent years. The resolution asks the companies to report on their policies and goals to reduce the gender pay gap.

In addition, Trillium Asset Management filed two gender pay gap resolutions at companies in the financial industry – American Express and Citigroup – arguing that the industry has one of the widest gaps in pay by gender relative to other parts of the economy. The proposal at American Express is unconventional, as it does not have a specific request; rather, the resolved clause states, “it is the sense of shareholders that gender pay inequality is a serious problem in the United States and in the financial services industry and that closing that gap is in the best interest of the company and the US economy.” At Citigroup, Trillium is asking that the company demonstrate that it does not have a gender pay gap. –Limor Bernstock and Enver Fitch, U.S. Research