In a landmark agreement reached Dec. 12, 195 countries committed to reduce greenhouse gas (GHG) emissions to a level that will cap the rise of the global average temperature to “well below” 2°C – a level that many scientists agree should not be surpassed. The deal, reached at the 21st session of the Conference of Parties to the U.N. Framework Convention on Climate Change in Paris, dubbed COP21, is being hailed by supporters as a watershed accord that will facilitate the transition to a clean energy economy.

Key features of the agreement include:

Some criticize the agreement as not doing enough to curb the harmful impacts of global warming, pointing to the fact that not all aspects of the accord are legally binding, and questioning whether the agreement will do enough to protect vulnerable populations and island nations.

Against this backdrop, and after successful campaigns earlier this year, investors remain focused on curbing GHG emissions at portfolio companies for 2016. The 2015 proxy season, with a sharp increase in both the number of climate change resolutions filed and in the diversity of requests, foreshadows what investors can expect to see on 2016 ballots. 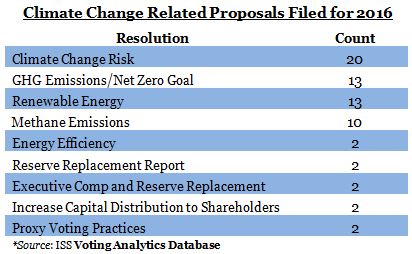 ISS is currently tracking 66 climate change proposals for 2016, compared with a total of 68 for all of 2015. Resolutions on climate change risks are the most prevalent, with 20 submissions. The scope and specificity of the risk proposals continue to develop as investors respond to the changing political landscape, and the resolved clauses vary from requests for annual assessments of long-term impacts resulting from potential climate change policies to reports on stranded carbon asset risks.

Shareholders also continued to file proposals asking for a GHG emissions reduction goal (10 proposals), with some asking companies to adopt a “net zero” GHG emissions goal (three resolutions). Resolutions on methane emissions are on the rise for 2016, moreover, with the California State Teachers’ Retirement System filing five of the 10 resolutions submitted on the topic.

Renewable energy proposals will also be taking a central role in 2016. Thirteen resolutions have been filed thus far, not just at energy companies, but also at consumer goods and telecommunications firms. Most of these proposals ask for the adoption of quantitative targets to increase renewable energy sourcing and/or production.

Some proposals in 2016 move away from the traditional environmental and social (E&S) proposal requests, and marry the asks with compensation and corporate governance concepts. A repeat proposal at Chevron and ExxonMobil asks them to increase the amount of capital distributed to shareholders due to the risks of stranded carbon assets and the decreasing profitability of unconventional projects. Last year, this proposal was allowed to be omitted by the SEC at Exxon, and at Chevron it received just over 3 percent support. A new resolution this year, filed at both companies, asks them to provide shareholders with a report of their reserve replacements by resource category. 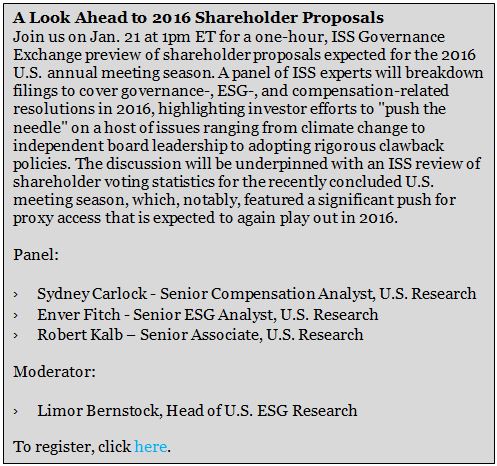 Proposals at ConocoPhillips and Chesapeake Energy seek to delink executive compensation from the companies’ reserve replacement ratio in an effort to cease promoting the exploration of reserves through the company’s compensation program. A variation of this proposal was filed at Conoco last year, and received 5.8 percent support.

Financial institutions Franklin Resources and T. Rowe Price Group each received a resolution asking them to assess incongruities between their proxy voting practices and their stated commitments to preventing climate change. Last year, a similar proposal asking the firms to review their ESG proxy voting practices was challenged at the SEC and was allowed to be omitted at Franklin based on ordinary business grounds. The proponents consequently withdrew the resolution at T. Rowe Price. However, this year the SEC rejected Franklin’s challenge, noting that “the proposal focuses on the significant policy issue of climate change.” This move could potentially open up the door to more proposals being filed at financial institutions on their proxy voting guidelines as they relate to climate change. — Enver Fitch and Limor Bernstock, U.S. ESG Research, and Eleanor Garretson, U.S. Custom Research