“Refreshment” is among the most hotly-debated topics across U.S. boardrooms and within the broader corporate governance community. While shareholders, directors, and other market constituents vary as to the reasons for their refreshment concerns, they typically include snail-paced board turnover, sky-rocketing tenures, stagnant skillsets, and deficient diversity. 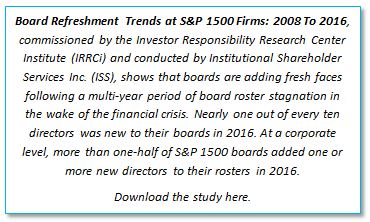 Investor respondents to ISS’ 2016-2017 Global Policy Survey (conducted between Aug. 2, 2016, and Aug. 30, 2016) were asked which tenure-related factors – with multiple answers allowed – would give rise to concern about a board’s nominating and refreshment processes. Among the 120 institutional investors (one-third of whom each own or manage assets in excess of $100 billion) who responded, 68 percent pointed to a high proportion of directors with long tenure as cause for concern, 53 percent identified an absence of newly-appointed independent directors in recent years as a potential problem, and 51 percent flagged lengthy average tenure as problematic. Just 11 percent of the investor respondents said that tenure is not a concern, although even several of those respondents indicated that an absence of newly-appointed directors is a concern. In their comments, several investors identified other factors of concern, such as directors’ ages, a high overlap between the tenure of the CEO and the tenure of the non-executive directors, and lengthy average tenure coupled with underperformance.

Suggested remedies vary as well. Some investors and board members urge wider use of “forced exit” mechanisms such as mandatory retirement ages or term limits. Other boardroom observers seek process improvements such as board/director evaluations, continuous boardroom succession planning, and enhanced disclosure of these procedures.

A growing number of investors have begun to take refreshment matters into their own hands. Some shareholders routinely oppose the reelection of long-tenured directors to encourage turnover and fresh blood. Importing a practice from the U.K. and other global markets, other investors threaten to slap “affiliated” (non-independent) labels on long-tenured board members in hopes of spurring boardroom succession. While long tenure, by itself, is typically not enough to sway an election result, it can create a tipping point in contested elections. Notably, hedge funds increasingly seek to tap into investor angst over refreshment by targeting long-serving board members. 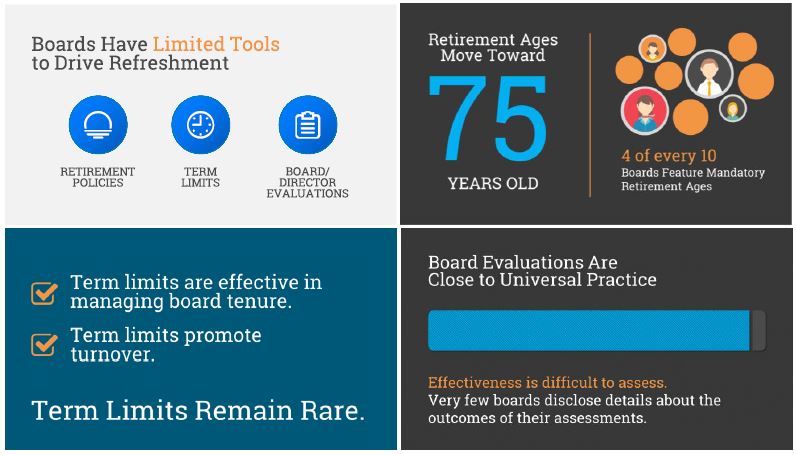 Diversity has become a lightning rod with respect to refreshment. Activists target low-diversity boards with shareholder resolutions and letter-writing campaigns. Disenchanted with the slow pace of progress, some players even urge market regulators to follow the lead of some of their global counterparts by using quotas and other best practice rules (including enhanced disclosure of nominating procedures) to speed up changes in boardroom composition.

Largely missing from this debate is hard data on: (1) the scope of the perceived problem, (2) the most effective methods for promoting board refreshment, and (3) the benefits and possible side-effects of adopting them.

According to the ISS press release on the paper, the intense focus that investors and others have placed on board refreshment has begun to pay off. However, structural trends and governance practices that encourage longer tenures could slow, or even reverse this progress over the next decade.

The recent surge in renewal (see box, above) obscures some longer-term trends towards longer-serving and older directors. Directors with at least ten years of board service now occupy an eye-catching 38 percent of board seats and about half of those are held by directors with 15 or more years of tenure. Also, directors in their seventies and eighties have increased their share of directorships to more than 20 percent of all directorships; the average director age rose two years for the study period, from 60.5 years in 2008 to 62.5 years 2016; and the proportion of directors aged less than 50 declined, despite much corporate, media, and investor discussion of the need for millennial- and technology-focused directors.

One positive change with respect to diversity was a surge in refreshment in 2016. This included 24.4 percent female and 13 percent ethnic or racial minority director nominees, more than the historic norms. 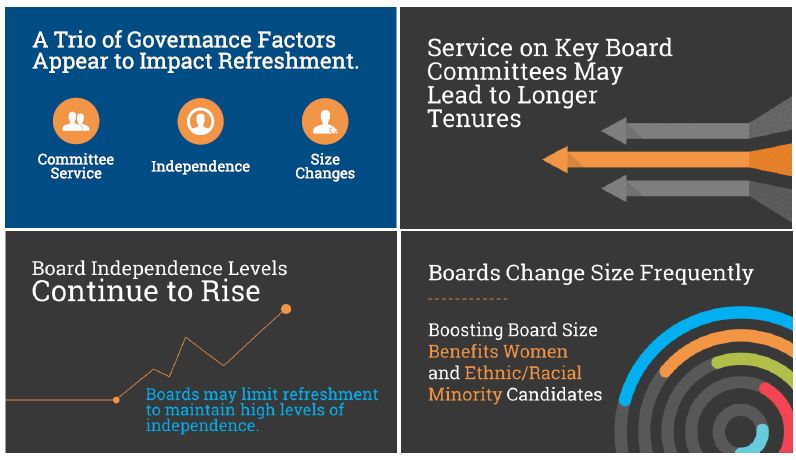 “Who sits around the board table matters,” said Jon Lukomnik, IRRCi executive director. “The directors of a company are responsible for selecting the CEO, the corporate strategy and the capital structure. So it’s no wonder that board composition and refreshment are among the hottest topics for investors and issuers. The good news is that boards seem to be listening and increased refreshment recently, but it’s off a very sluggish trend line.”

“This report provides hard data – not just about age, tenure, and refreshment – but also about the effectiveness of mechanisms such as age limits, tenure limits, and board evaluations. That is valuable. For example, it may be intuitive that boards that do not perform board evaluations are older and staler than other companies – and this report proves it,” Lukomnik explained.

“Our institutional investor clients put their faith in corporate directors to oversee their long-term investments, so assessing refreshment is critical to their oversight of boards,” said ISS Head of Strategic Research and Studies, Patrick McGurn. “While there is no quick fix, we hope that benchmarking refreshment practices will fuel constructive engagement on the topic between shareholders and directors.” –Pat McGurn, ISS Head of Strategic Research and Studies

The foregoing is an excerpt from the ISS/IRRCi study, Board Refreshment Trends at S&P 1500 Firms, 2008-2016. The study is available here for download, and Financial Times coverage of the study can be found here.