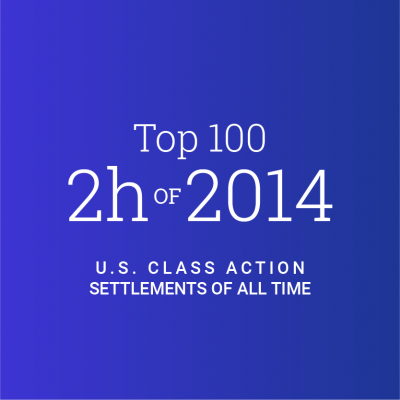 Previously in the ISS Securities Class Action Services Top 100 for 1H 2014, two new settlements were identified as making the Top 100 list, Massey Energy Company, and the Ernst & Young LLP settlement in the Lehman Brothers Holdings, Inc. (Equity/Debt Securities) Action. These two settlements were filed in Federal Court and alleged as violating Rule 10b-5 of the Securities and Exchange Act of 1934 (Employment of Manipulative and Deceptive Practices). The two settlements amount to $359 million in settlement funds.

For the second half of 2014, two out of 61 new settlements were placed in the ISS Securities Class Action Services Top 100 for 2H 2014, J.P. Morgan Acceptance Corp and HarborView Mortgage Loan Trust. Filed in Federal Court in the midst of the financial credit crisis, both settlements relate to mortgage offerings and were alleged violations of the Securities Act of 1933 (Civil Liabilities on Account of False Registration Statement). The volume of settlements added in the report is 78 percent lower compared with the same period in 2013, when ISS Securities Class Action Services tracked 61 agreements. The two settlements involve approximatly 1700 security identifiers.