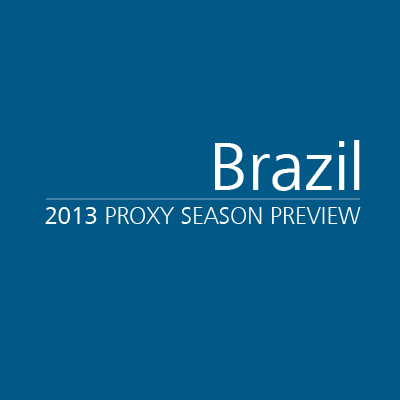 Increased minority shareholder activism, growing focus on sustainability issues, revitalization of the country’s stock market through improved access for medium and small cap companies, as well as the promotion of a self-regulatory framework by the newly created Mergers & Acquisitions Committee (CAF), are some of the highlights for the Brazilian 2013 proxy season.

The withholding of individualized remuneration information will most likely persist during the 2013 proxy season due to ongoing legal proceedings stemming from the 2010 injunction filed by Brazilian executives claiming that current disclosure rules violate their privacy and expose them to greater security risks.

The peak of proxy season in Brazil is from mid-March to mid-April.