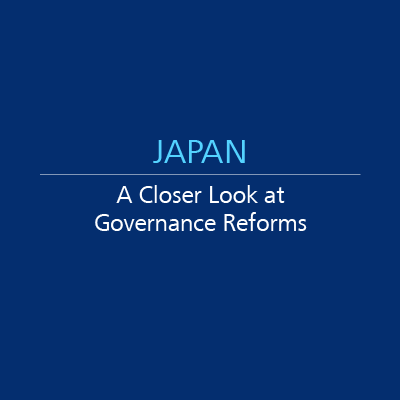 The 2015 proxy season will mark the beginning of a new chapter in governance in Japan. On March 5, 2015, Japan’s Financial Services Agency (“FSA”) published Japan’s Corporate Governance Code (the “Code”), which is scheduled to be implemented in June 2015, immediately preceding Japan’s annual proxy season. The publication follows a Feb. 24, 2015, announcement by the Tokyo Stock Exchange (“TSE”) that it would amend its listing rules, effective June 1, 2015, to require listed companies explain any non-compliance with the Code. Most notably, the TSE revisions serve to require listed companies have at least two outside directors. The introduction of the Code is part of the so-called “third arrow” of Abenomics’ structural reforms for revitalization, with arrows one and two addressing monetary policy and fiscal policy, respectively.

The publication of the Code capped a long list of capital market revitalization efforts which have included: (i) the launch of the JPX-Nikkei 400 index, a new stock index with key selection criteria of return on equity (ROE), operating performance, and market capitalization; (ii) the introduction of a Stewardship Code to encourage engagement between investors and issuers; (iii) Corporate Law amendments related to outside director appointments and board structure; (iv) the publication of the Ito Review as a roadmap for companies and investors to work together to create sustainable value; and (v) changes in the investment strategy of the 137 trillion yen ($1.1 trillion) Government Pension Investment Fund (“GPIF”). This paper provides a recap of these and other major developments shaping Japan’s governance landscape.