Asset managers must keep track of, plan for, and strategize about multiple factors to ensure they are maximizing returns on client investments. However, by focusing narrowly on the ups and downs of the market, it is possible to overlook operational-based strategies for enhancing return on investment (ROI).  Securities class action settlements, provide managers an opportunity to secure additional returns on domestic and international portfolios. By pursuing these entitlements, managers can annually improve performance by tens of basis points while upholding fiduciary responsibility. The following explains the opportunities and quantifies the benefits of participating in Securities Class Actions.

When a corporation violates securities laws, shareholders who have suffered a financial loss can file lawsuits to receive compensation for the economic injury. If a judge rules in the plaintiff(s)’ favor, all shareholders who owned the stock during the same period, known as ‘class members’, are potentially eligible for monetary awards. To the surprise of many investors, both active and passive shareholders are eligible for class membership, even those who hold shares through indices.

Benefits of class actions are not granted automatically, however. To secure entitlements, investors must follow certain claim filing procedures to identify themselves before the court. For those that do opt to participate, the opportunities are often considerable.

In the last 10 years, 1,420 securities class action lawsuits have been settled; 96 of the 1,420 (or six percent) were lodged against members of the S&P 500. Although six percent may sound like a small portion, it represents a substantial amount in monetary terms. Indeed, each of the 10 largest lawsuits settled for more than $300 million. The most significant lawsuit, involving Bank of America Corporation, settled for nearly $2.5 billion, translating to significant recoveries for claimants. 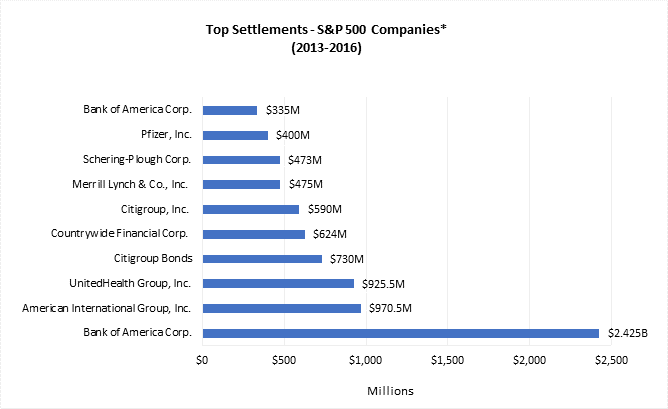 * Bank of America and Citigroup are both listed twice, as each case is unique with different eligibility requirements.

To quantify the opportunity on a per-claimant basis, consider what recoveries would look like in a few typical scenarios. For instance, say an investor held one million shares in each of the above 10 securities prior to the settlements from January 1, 2013 through December 31, 2016. Given the settlement amounts and proration rates, the investor could potentially recover over $6 million from his or her positions. As another example, consider a passive investor with $1 billion in holdings indexed to the S&P 500. By participating in class actions, that investor could potentially recover $1.4 million from previously traded losses.

* Figures are taken from 32 total settlements of S&P 500 companies during 2013 – 2016 using the average recovery per share from each of the legal Settlements Notices; actual recoveries will vary based upon specific trading data in the claims submitted.

Criteria for participating in a securities class action lawsuit is relatively straightforward: an investor must simply have purchased the security during the class period. However, the actual process of submitting claims can require a fair amount of work. After the case settles, a claims administrator is appointed to notify class members of the opportunity and provide instructions for settling claims. Investors typically have a three-month window to review and provide transaction and position data for each potentially eligible fund — often from the past three-to-seven years. Investors must submit this data alongside a signed claim form. Once the claims have been submitted, the claims administrator can still require more documentation and information before providing any compensation.

Even though the claims filing process affords ample opportunities to recoup losses, a number of studies illustrate that investors, including sophisticated institutional firms, are not participating. One of the most widely-cited figures suggests that only 25 to 33 percent of eligible institutions are actually filing claims.[1] Although this specific statistic is somewhat dated, the issue of investors failing to submit eligible claims remains widespread. The underlying reasons vary, though common explanations include a narrow focus on trading strategy or lack of resources to track ongoing opportunities and prepare the proper documentation to file claims.

*The current list of active cases approaches 100 firms; the above is a sample listing only

Never miss an opportunity for recovery.

Learn more about this settlement and how SCAS can help your organization participate.