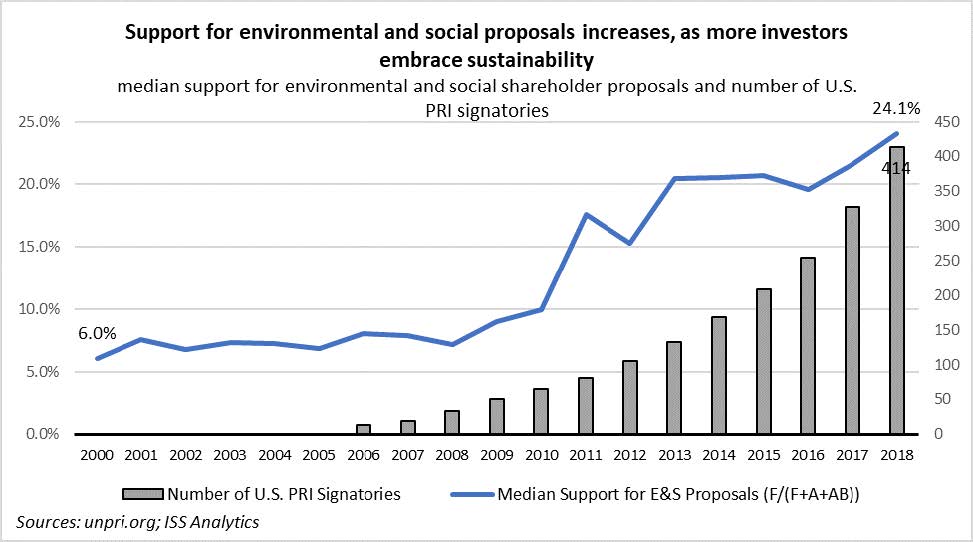 Appearances can be very deceiving. Case in point: The high-level summary numbers of voting results over the last nineteen years seem to indicate that little has changed regarding proxy voting behavior among investors owning U.S. companies. A simple analysis of median vote support levels for management and shareholder proposals seems to reveal stasis – support levels remain at approximately the same levels they were back in the early to middle 2000s.

But the reality is that investor voting behavior among owners of U.S. companies has changed significantly – perhaps almost revolutionarily – over the past two decades. The last decade saw a dramatic change in investors’ attitudes towards environmental and social issues. A confluence of factors has led to the increase in the median level of support for environmental and social shareholder proposals as a percentage of votes cast from the middle single digits from 2000 until 2008 to the 24 percent in 2018, including pressures from the public and regulators in the aftermath of the financial crisis, global policy initiatives, major disaster events, and the evolution of the debate by proponents from a values-based framework to a value-oriented discussion of managing potential business risks. Increasingly, investors embrace sustainability and are becoming more actively engaged on the issues. At the same time, key policy priorities, such as climate change and diversity have given a further boost to shareholder campaigns.